Home > Renungan harian > THEIR STAGE IS IN ROME 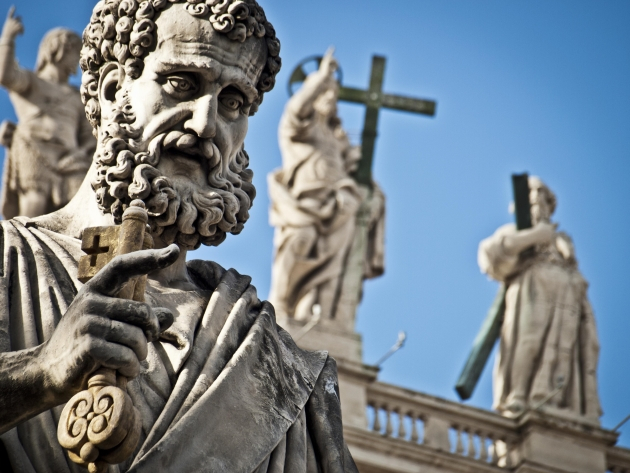 Reading and meditation on the Word of God, Tuesday of the 13th week in ordinary time

The reading is taken from the holy Gospel according to Matthew

When Jesus went into the region of Caesarea Philippi
he asked his disciples,
“Who do people say that the Son of Man is?”
They replied, “Some say John the Baptist, others Elijah,
still others Jeremiah or one of the prophets.”
He said to them, “But who do you say that I am?”
Simon Peter said in reply,
“You are the Christ, the Son of the living God.”
Jesus said to him in reply, “Blessed are you, Simon son of Jonah.
For flesh and blood has not revealed this to you, but my heavenly Father.
And so I say to you, you are Peter,
and upon this rock I will build my Church,
and the gates of the netherworld shall not prevail against it.
I will give you the keys to the Kingdom of heaven.
Whatever you bind on earth shall be bound in heaven;
and whatever you loose on earth shall be loosed in heaven.”

The Gospel of the Lord

Our meditation today has the theme: Their Stage is In Rome. The common evidence in our hands that provides us the information about the apostles Peter and Paul’s witness of faith is what we find in the scriptures, especially in the new covenant. Each of them had a unique story that touches our hearts. They had left a spiritual legacy to us through their writings that we find in their letters. These are the narrative facts, words, and stories about them.

There is another evidence that speaks about them which we can call it as the fact of stage, locus, or place from whichtheir lives were traced. Today the Church honors those stages as sacred places and means for public devotion. Today, the most obvious stage that bears witness to the entire world about these two great apostles is the city of Rome in Italy. They were originally Jews who came from Palestine to Rome during the time of the Roman Empire. Nowadays, almost no remains of either Saint Peter or Paul is found in the Palestine.

When people make pilgrimages to Jerusalem and the region of the Sea of ​​Galilee, they will find very limited evidence about these two apostles. There maybe only an evidence found in the city of Jesus which is Capernaum that provides a few fact, which is the ruins of Peter’s parents-in-law’s house. However, when people visit the city of Rome in Italy, they will find many real and historical facts about these two great apostles. Among these many facts, what visitors like the most are their tombs. Above those tombs now stand St. Peter’s Basilica and St. Paul’s Basilica.

The Acts of the Apostles reveal a little drama of their journey to Rome to face trial in front of by the Roman judicial power. The historical records of the Church provide other details about the process of the severe punishment of Peter and Paul in Rome. Time and history later proved that the stage of the city of Rome had made them bear the highest witness of Jesus Christ through their martyrdom. Their spilled blood bears fruit for the foundation and growth of Christian faith which has been so increasingly worldwide. Today, Rome and especially the Vatican is the central locus of the Catholic Church, that had begun by the testimony and work of the apostles Peter and Paul.

In Jerusalem and the land of Judea, there was the initial stage of the calling of the apostles Peter and Paul. In Rome they both demonstrated that the choice to follow Jesus must be radical and final. In the scriptures they still teach the truth about Jesus Christ, and in heaven they are both our honorable and great saints who always pray for us. In today’s solemnity of Saints Peter and Paul, we should pray and give thanks for our universal and apostolic Church in which we commit our membership.