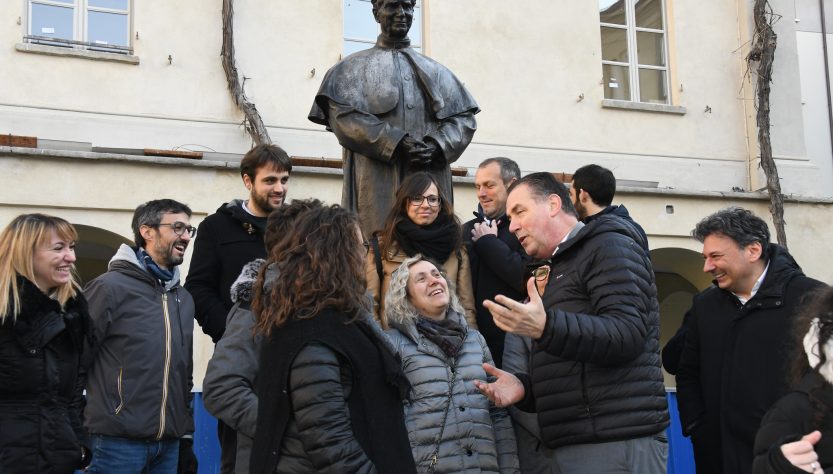 Readings and meditation on the Word of God, 13th Sunday in Ordinary Time

The reading is taken from the book of Wisdom

God did not make death,
nor does he rejoice in the destruction of the living.
For he fashioned all things that they might have being;
and the creatures of the world are wholesome,
and there is not a destructive drug among them
nor any domain of the netherworld on earth,
for justice is undying.
For God formed man to be imperishable;
the image of his own nature he made him.
But by the envy of the devil, death entered the world,
and they who belong to his company experience it.

Brothers and sisters:
As you excel in every respect, in faith, discourse,
knowledge, all earnestness, and in the love we have for you,
may you excel in this gracious act also.

For you know the gracious act of our Lord Jesus Christ,
that though he was rich, for your sake he became poor,
so that by his poverty you might become rich.
Not that others should have relief while you are burdened,
but that as a matter of equality
your abundance at the present time should supply their needs,
so that their abundance may also supply your needs,
that there may be equality.
As it is written:
Whoever had much did not have more,
and whoever had little did not have less.

The reading is taken from the holy Gospel according to Mark

When Jesus had crossed again in the boat
to the other side,
a large crowd gathered around him, and he stayed close to the sea.
One of the synagogue officials, named Jairus, came forward.
Seeing him he fell at his feet and pleaded earnestly with him, saying,
“My daughter is at the point of death.
Please, come lay your hands on her
that she may get well and live.”
He went off with him,
and a large crowd followed him and pressed upon him.

While he was still speaking, people from the synagogue official’s house arrived and said,
“Your daughter has died; why trouble the teacher any longer?”
Disregarding the message that was reported,
Jesus said to the synagogue official,
“Do not be afraid; just have faith.”
He did not allow anyone to accompany him inside
except Peter, James, and John, the brother of James.
When they arrived at the house of the synagogue official,
he caught sight of a commotion,
people weeping and wailing loudly.
So he went in and said to them,
“Why this commotion and weeping?
The child is not dead but asleep.”
And they ridiculed him.
Then he put them all out.
He took along the child’s father and mother
and those who were with him
and entered the room where the child was.
He took the child by the hand and said to her, “Talitha koum,”
which means, “Little girl, I say to you, arise!”
The girl, a child of twelve, arose immediately and walked around.
At that they were utterly astounded.
He gave strict orders that no one should know this
and said that she should be given something to eat.

The theme for our meditation on this 13th Sunday in ordinary time is: Choose Good News, Not Bad News. There was a teacher who always began the lesson in class by informing his students of the two news daily. He gave the bad news first, then the good news. For example, before the lesson on natural science, the bad news to be shared with his students was the rain that would last for hours even until late afternoon. This information would soon become a bad sign that cause fear to the students especially those who came from far away houses. He then continued to give the good news which he wanted to reveal it after the lesson.

As this method to be used by teacher in regular basis, how afraid and anxious all the students will be every day! Every day in school should be a terror for them. What this teacher did indeed represents our situation in the world today. If we see to it closely, the printed, electronic and online media have their main interest to present controversial news that tends to be negative, to make noise or raise debate, to contain criticism and slander. They want to attract people’s attention and increase the public’s rating, with the ultimate goal is to benefit them financially. All of us seem to be obsessed and determined by what the media thinks.

The current spread of news and our personal or community absorption of information at this moment is really worrying our own lives. We must admit that knowledge that we get from the news has significant role to shape our patterns of thought, feelings, emotion and action in today’s society. The Book of Wisdom in the first reading today gives us an illustration of how Satan hates this world and he wants to destroy it, among other things by using irresponsible and very destructive media. Apparently the world today shows that its face is covered in blood because of the bad and negative news that beats its life every day.

Saint Paul is convincing us in the fact that there are still people in the world today who carry out the noble task of producing and spreading the good news. They are not many for sure. But they are expected to be able to fill the gaps and shortcomings that exist. They cannot walk and do things to satisfy themselves. They must attract the creators and sharers of bad news to join in the path of goodness and truth.

The Lord Jesus is our hope. Today He resolutely makes a strong reaction to stop a big current that spreads bad news and creates trouble among the people. The creators and bearers of bad news were silenced. He commanded them to get out of the troubled circle of life, so that goodness and truth may sustain peace and optimism in the life of people. Good news is a richness of knowledge to be shared in the spirit of love. While bad news is poison. Satan is at work in every bad news, so it is our duty to silence him and throw him out of our circle of life.